We often receive enquiries from clients who are not really sure what team activity they want, and that’s absolutely fine. We take pride in finding the perfect fit, based on the budget, timescale, objectives and participants’ characteristics. In contrast, we also get very specific briefs – ones that don’t fit a pre-formatted agenda and require rearrangement to suit the bespoke requirements of a client.

At the end of last year, I took a call from clients who were planning an event for 300 delegates in Portugal for April this year. They already had their hearts set on a One Voice choir. They wanted the group of 300 to be split into six smaller teams. They wanted the song to be about light, which was the theme for the conference. They wanted the activity to be filmed with some directing, and they wanted it to be lots of fun! This was to represent a light-hearted afternoon in what was otherwise a packed and intensive three-day conference. Oh, and they were ending their final night with an Abba tribute band so could we incorporate this somehow? 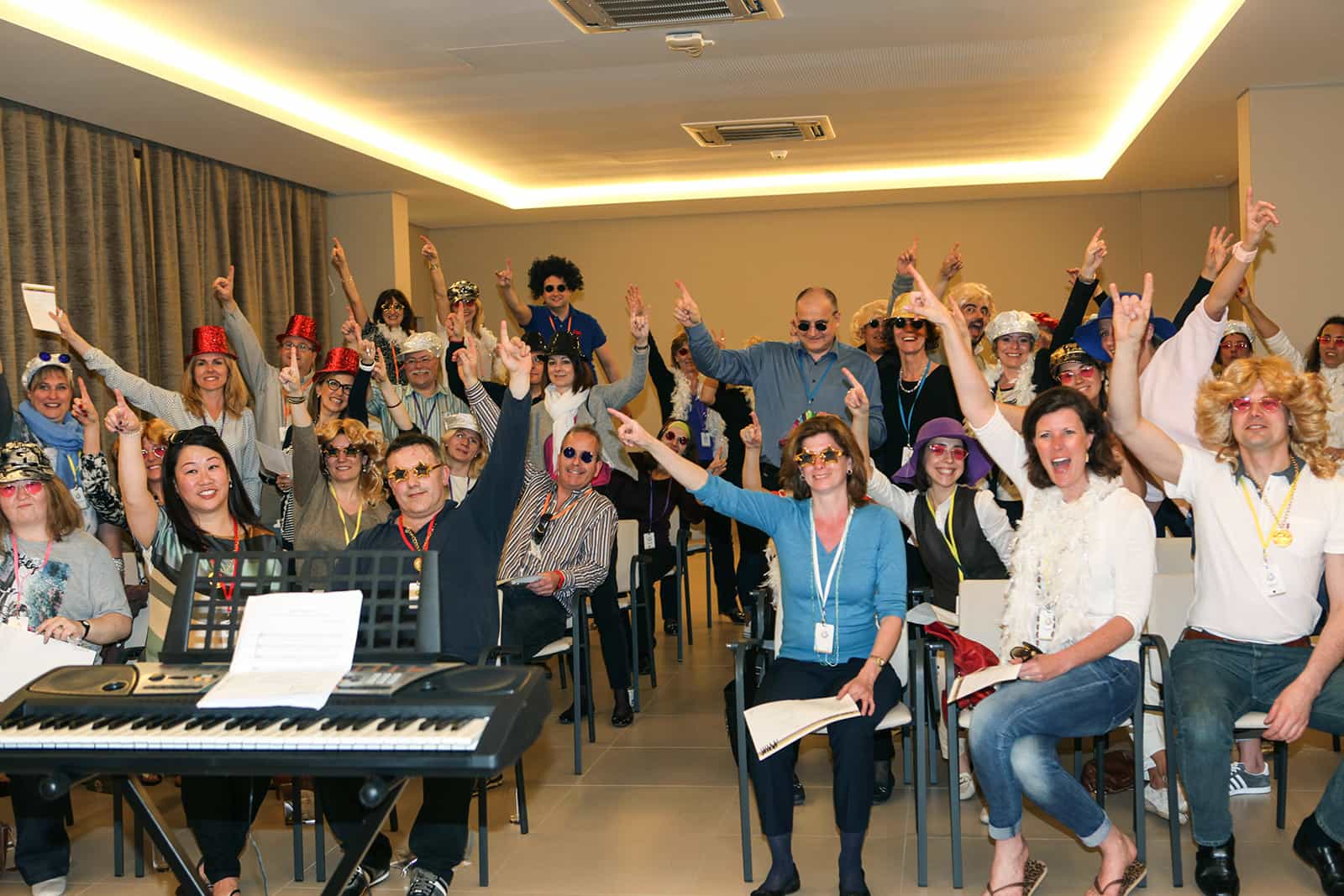 Of course my answer was ‘YES!’ on all counts and I set about putting the plan into action. The clients ensured there were six suitable breakout rooms for each group and I contacted six of our super-talented vocal coaches, who were all keen to get involved. I’m sure that the location did nothing to influence their decision making!

In a lightbulb moment, we chose Abba’s ‘Super Trooper’ for the song. A Super Trooper is a large spotlight, which perfectly fitted the conference theme. The song is also perfect for being broken down into individual harmonies and melodies for the groups to learn. The delegates were attending from all over the world and very few spoke English as a first language so it was also essential that the song was well known. Song box ticked!

After detailed planning and armed with six keyboards and the rewritten score, we arrived at our fabulous hotel in Albufeira the day before the event to prepare. We met with the conference organisers, clients, and the video and sound crew to finalise all the plans. After a successful rehearsal, it was time to turn a room of 300 novices into a spectacular choir in just a couple of hours.

As the delegates settled in to their seats, our singers took to the stage one by one in a ‘flash-mob’ style beginning. They then announced to a rather bewildered audience what journey they were about to be led on. After a fun warm-up, the slightly sceptical groups were taken to their rooms to begin rehearsals. They were each learning a different harmony and had no idea what the other teams were doing and how they were going to sound when they all got back together. 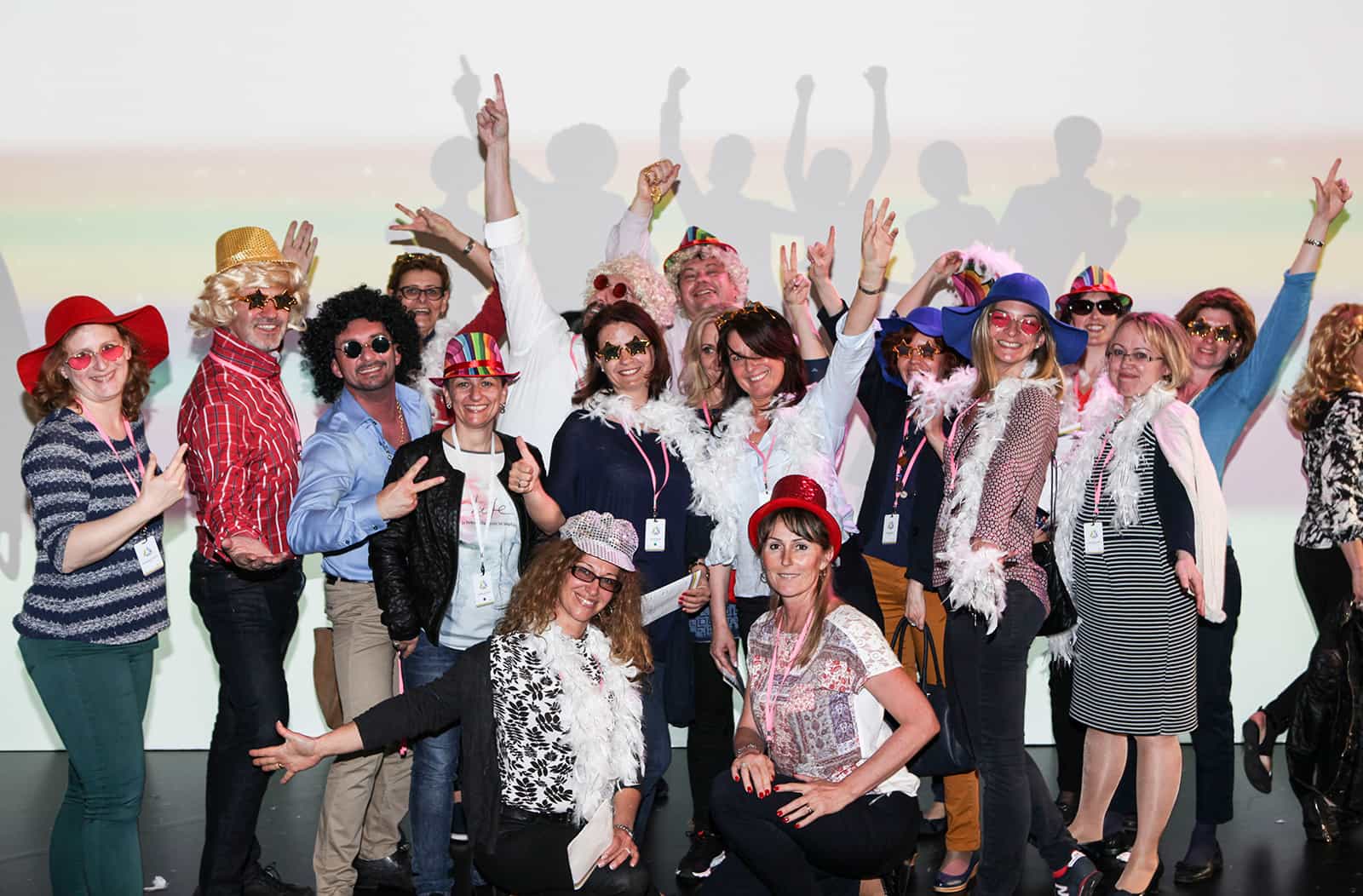 Despite the initial scepticism, our highly professional facilitators gently roused the group so that everyone got involved and gave it their all. At this point, a large supply of 70s props were brought into the rooms and there was lots of laughter at the big wigs and fake hairy chests! Now with the right look and the sound, we brought everyone back together in the main plenary area, which had been transformed to allow the whole group to stand together as a choir. This also provided a great shot for the film crew who had been documenting all their moves up until this point.

It was amazing how quickly the sounds gelled and you could see the look of pride on people’s faces as they heard for the first time just how great all the harmonies sounded when brought together.

For the big finale performance, clapping and other simple movements were introduced and the delegates performed a final rousing spectacular with hands in the air. They gave themselves a huge round of applause and clearly everyone in the room was delighted with the result.

In order to create a ‘music video’ vibe, a team of volunteers remained and our team took them to various locations around the venue and added in some simple choreography.

The videographers were then left with the unenviable task of editing the complete footage through the night in order to reveal it at the big awards ceremony the following day, complete with Abba tribute band.

The final edit was superb and really captured the energy of the activity, with the feedback from our clients echoing this. All in all, it was great to be a part of creating something unique for our clients, which exceeded expectations.

Full credit goes to the organisers for their initial vision, to our six exceptional vocal coaches and to the 300 delegates who embraced the experience and were a delight to work with.

For more information about our events, please Contact Us.