There must be something about Telford Conference Centre! Whenever we go there, we could not ask for a better audience. We once delivered a conference drumming event there for The Body Shop. When our team of ten came out playing on stage, we were confronted with a screaming Beatlemania-type audience of over two thousand! This was before we had even done anything with people. Minutes later, everyone had drums to play and we created a colossal drumming orchestra. The atmosphere in the huge room was unlike anything we had experienced before and perhaps even since. 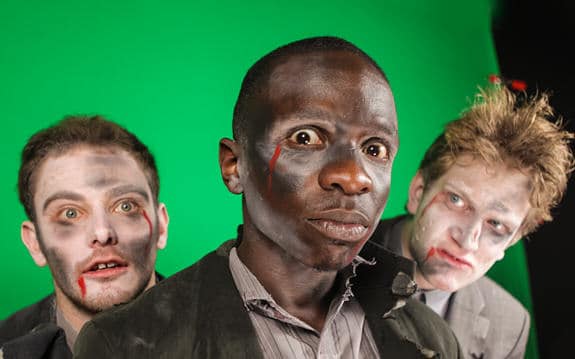 We returned this week with a very different event and a different audience but, again, it turned out to be an amazing show with fantastic audience participation. This time, over 800 delegates experienced a unique Thriller morning energiser that will never be forgotten.

As soon as everyone had sat down in their seats, the lights dimmed in the room and spooky music began to play. A creeping fog rolled over the enormous stage and ghoulish shapes appeared out of nowhere.

As they heard the start of the music and saw the lights and the themed backdrop on the screen, members of the audience immediately recognized the Thriller soundtrack. They were then treated to a full performance from our zombie dancers. Our dancers started as staggering half-dead characters, moving in perfect unison just as Michael Jackson did in his famous music video. This was a very unexpected conference opener. 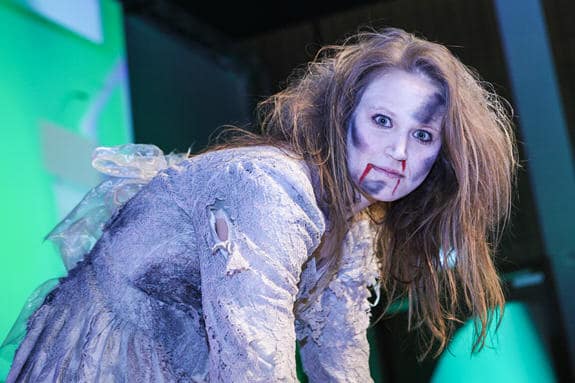 There was rousing applause, which quickly turned to a disbelieving hush as the delegates were told that, in under 30 minutes, they would all learn very similar moves to create one huge room of choreographed zombies!

First things first, we had put under each seat a collection of zombie rags for each delegate to quickly adorn. Normally, we have up to two hours to teach the moves, do the makeup and add costumes. However, this was a bespoke and rapid version to fit perfectly into the conference agenda.

Next, we focused on the moves. We had a specially choreographed version of the Thriller dance, created so that it could be performed as a group in theatre style. This was a hilarious sight as everyone tried to remember the outrageous stances and gestures of the dance. 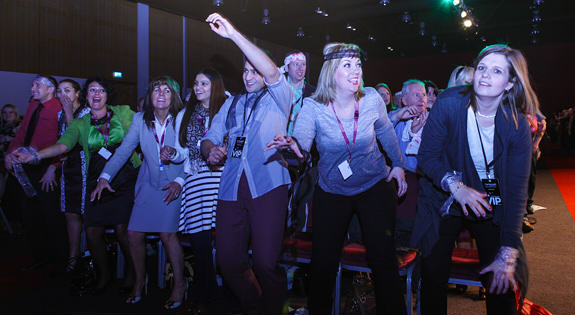 As the last minutes ticked away, it was time to prepare and perform the entire song in a farewell finale. The fog filled the stage once more and the horror lighting added to the mood as everyone experienced being part of our huge zombie Thriller morning wake-up call.

The Thriller event was a total success. Unlike zombies and creatures of the night that sleep through the day, this conference energiser had everyone totally energised and laughing, ready for the rest of the conference!

For more information about Thriller, or any of our events, please Contact Us now.