In our central London venue, nearly 200 people walked in to collect their pre-dinner drinks. They found the room beautifully lit, with a live band set up for later and our glamorous event managers dressed in evening gowns and distributing coloured feather boas to everyone. The coloured feather boas not only made for an entertaining entrance, but unbeknown to participants, denoted which breakout group they would later belong to!

After a delicious dinner, the Latin band burst into action. To the utter surprise of our guests, eight professional ballroom dancers took to the floor for a stunning performance. Heading up this troupe, and taking charge of the proceedings, was none other than Richard Marcel. Richard is Choreographer for the BBC’s prime time hit show Strictly Come Dancing and Artistic Director for ITV’s Britain’s Got Talent. 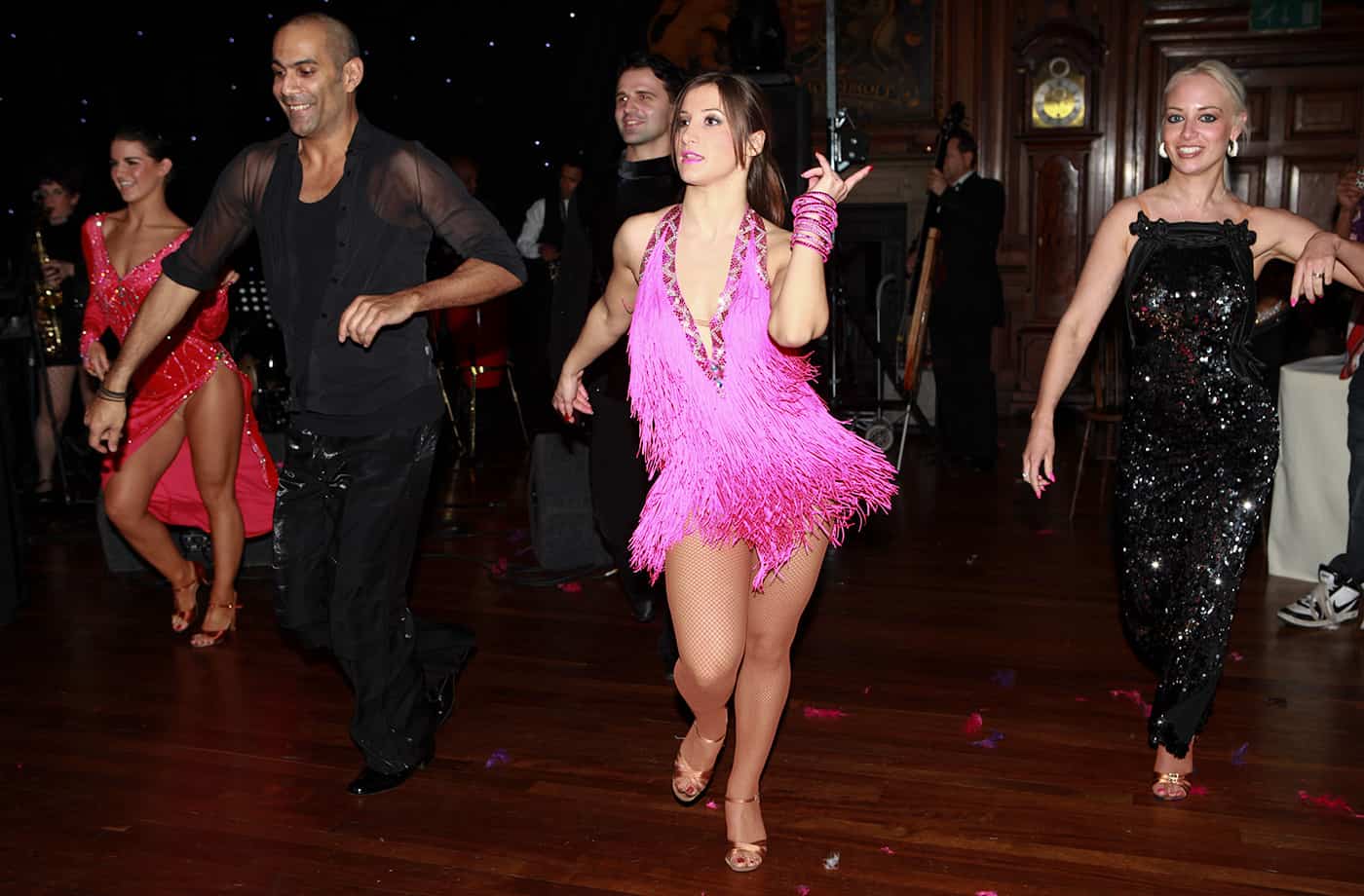 After rousing applause, the ultimate surprise for our audience was that they were to leave the room as part of one of four pre-selected groups. Accompanied by their own dedicated dance instructors, participants were led into separate rooms to learn, practise and perfect a group performance. Over the next 40 minutes, each participant had to learn one of the Cha-Cha-Cha, Merengue or two different Salsas, and then reconvene in the main hall for a thrilling dance competition!

In each break-out area, our expert instructors quickly demonstrated, and then facilitated, the dance steps, moves and necessary attitude for each of these exciting dance styles. Fostering just a little friendly competitive banter, our instructors quickly helped our newly-formed dancers to overcome their two left feet and awkward initial body movements.

Now it was time to return to the main room for the dance off between all four groups. We had three distinguished judges, with score cards in hand, who were fully prepared to provide entertaining and supportive critiques. In their day jobs, our esteemed judges were none other than the company CEO and two other VIPs.

The live band accompanied each amazing dancing performance, which inspired participants to even greater heights. Then, each group discovered what the esteemed panel thought of their efforts and, more importantly, what points they had scored.

With increasing anticipation and excitement, the final scores were added together. As the winning team was announced, there was a huge team cheer and immense satisfaction on the faces of everyone that had taken part.

Post competition, the live band continued to play, with the dance floor packed with those trying out their brand new ballroom dance moves, or mixing them with tried-and-tested old ones!

The session was a huge success. It provided a unique way to get the entire room of people involved, networking with new people and (let’s not forget) learning a new skill. The fantastic feedback from our clients provided the ‘cherry on the cake’ for us, and we definitely look forward to our next Strictly Team Dancing event. A huge thank you to Richard Marcel and his team for making the evening such a success.

We like to make every single activity we provide utterly unique for our clients, and Strictly Team Dancing is no exception. The format that I’ve described is just one of many formats that we can use, and we are always totally flexible and willing to react to each separate situation.

For more information about our team events, please Contact Us now.